Designing santa-lang, a language for solving Advent of Code puzzles

Over the past several years I have been slowly working my way through the previous Advent of Code calendars. For each calendar I opt to solve the puzzles in a new programming language, to familiarise myself with other ways of understanding and working. However, there comes a time in each calendar that I grow to dislike some aspect of the language. So I had an idea… why not give this whole programming language design a go. That way if I grow to dislike the language, I only have myself to blame!

Welcome santa-lang, my tree-walking interpreted programming language designed to help tackle Advent of Code puzzles. In this article I would like to discuss the high-level thought process and design considerations that went into building the initial language.

The first step I took was to clearly lay out the overall design goals of the language. Having did a little research into how other languages had been formed and continued to grow, it looked as though the underlying core values and design principles shaped each new decision. As such, I decided to compile a list of my desired direction and feature set for a language that would best help me solve Advent of Code puzzles.

Whilst writing the list above, I soon realised that there was a differentiation between the core language requirements, and the Advent of Code runner/runtime in which it would be evaluated. Thinking upon past experience whilst solving Advent of Code puzzles, and how a language runtime could aid in solution development, I devised the list below:

With my desired language and runtime goals laid out, I set off in developing the initial implementation. Fortunately there are some amazing resources out there to help get started building your own programming language. With respect to my runtime requirements (Cli and Web), and with the feeling that this journey would no doubt be a huge learning experience in itself; I felt it best to opt for a host language I was comfortable in, as such, I chose TypeScript.

Show me the code?!

One of the biggest takeaways from the initial development phase was the importance of spending time in the language you are designing, and exercising its use within the domain you want to solve problems in. In my case this was Advent of Code puzzles. Below is such an example of this process, where I went about solving day 1 of the 2020 calendar in santa-lang.

The source file has been structured to represent how an Advent of Code day puzzle is laid out. The language formally includes the concept of sections, in which this case (aided by the runner) are used to define the input, part_one, part_two and test blocks. Both part_* sections are supplied the resulting evaluation of the input section, within a global input variable. The in-built read function is host runtime specific (Cli and Web), and provides a means to read the relevant input file (into a string) based on the use of the aoc:// schema. Tests added to help aid in the solution of the puzzle can be defined in test sections, with the expected answers being supplied for automatic test-runner validation.

Within the above example, you can see how we have exercised the languages’ function threading (|>) and partial application support, list destructuring and use of rich built-in functions (ints, combinations). The language itself pushes you towards a more functional mindset, declaring the puzzle solution as opposed to imperatively laying out each step.

Below are several other example solutions which exercise more of the built-in language and runtime constructs provided.

Within the above solution to day 1 of the 2021 calendar, you can see use of function composition (>>), let bindings, named function definitions and list slicing.

Within the above solution to day 1 of the 2015 calendar, you can see use of infinite ranges, trailing Lambda’s, if expressions and short-circuiting a fold operation early (inspired by Clojure’s capability).

For more examples, check out the TypeScript implementations README and examples directory. One example of note is the re-implementation of map, filter, fold and reduce within the language itself - effectively highlighting use of pattern matching.

Once I had built the core language and runner, a lot of time was then focused on developing the Cli runtime. This was to ensure that I had the correct level of abstraction for what would be required as a runtime (Cli, Web) and core language/runner responsibility.

The resulting Cli is compiled into a single JavaScript artifact using esbuild, and then subsequently packaged into a binary distribution (using pkg) and Docker image. The inclusion of a Docker image provides me with the ability to easily run the test suite within my GitHub Action CI environment, inline with other calendar’s solutions. 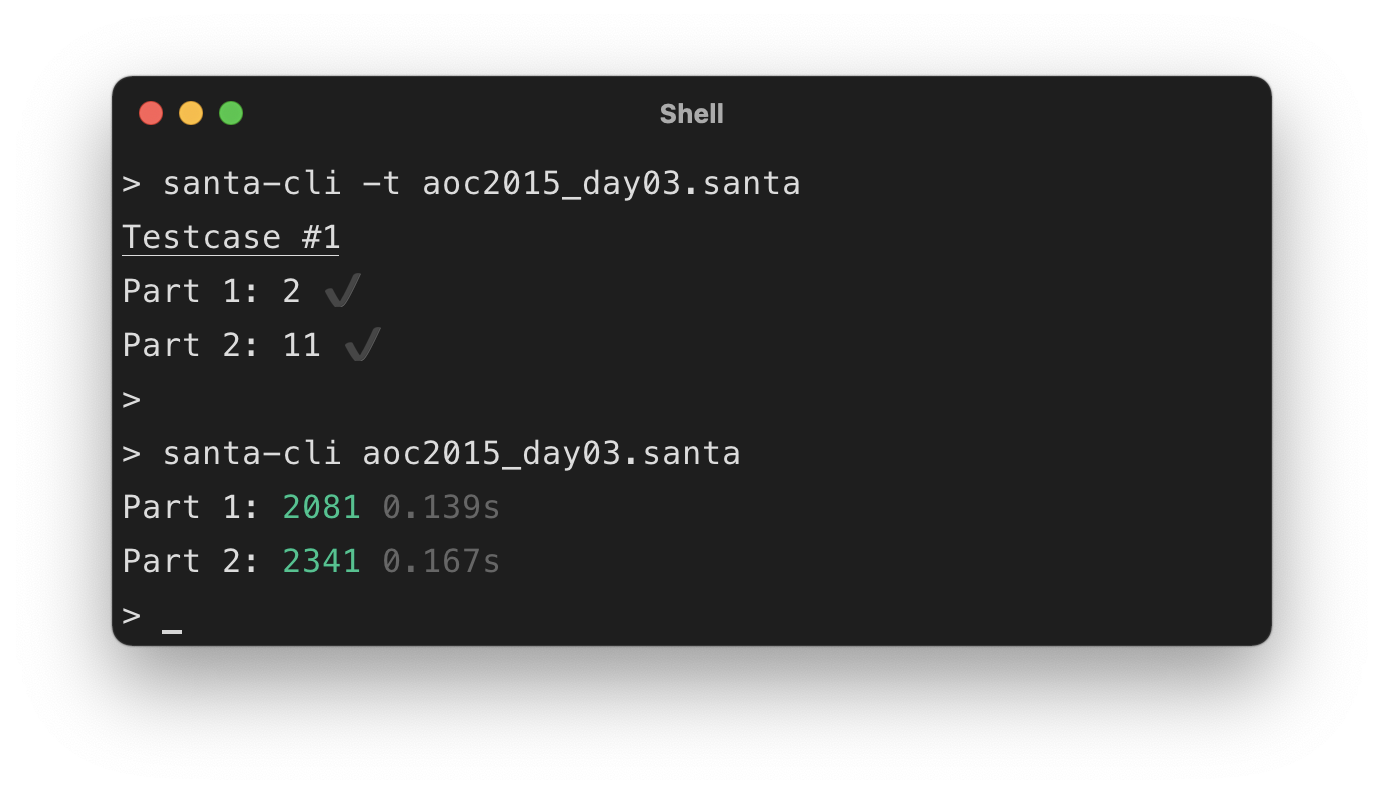 With the optional -t flag we are able to switch between exercising and validating the test input, and the real input. Additionally, input and output (per runtime) is abstracted away from the core language. In the case of the Cli I was able to optionally download (and locally cache) the user’s puzzle input with the inclusion of a SANTA_CLI_SESSION_TOKEN environment variable. 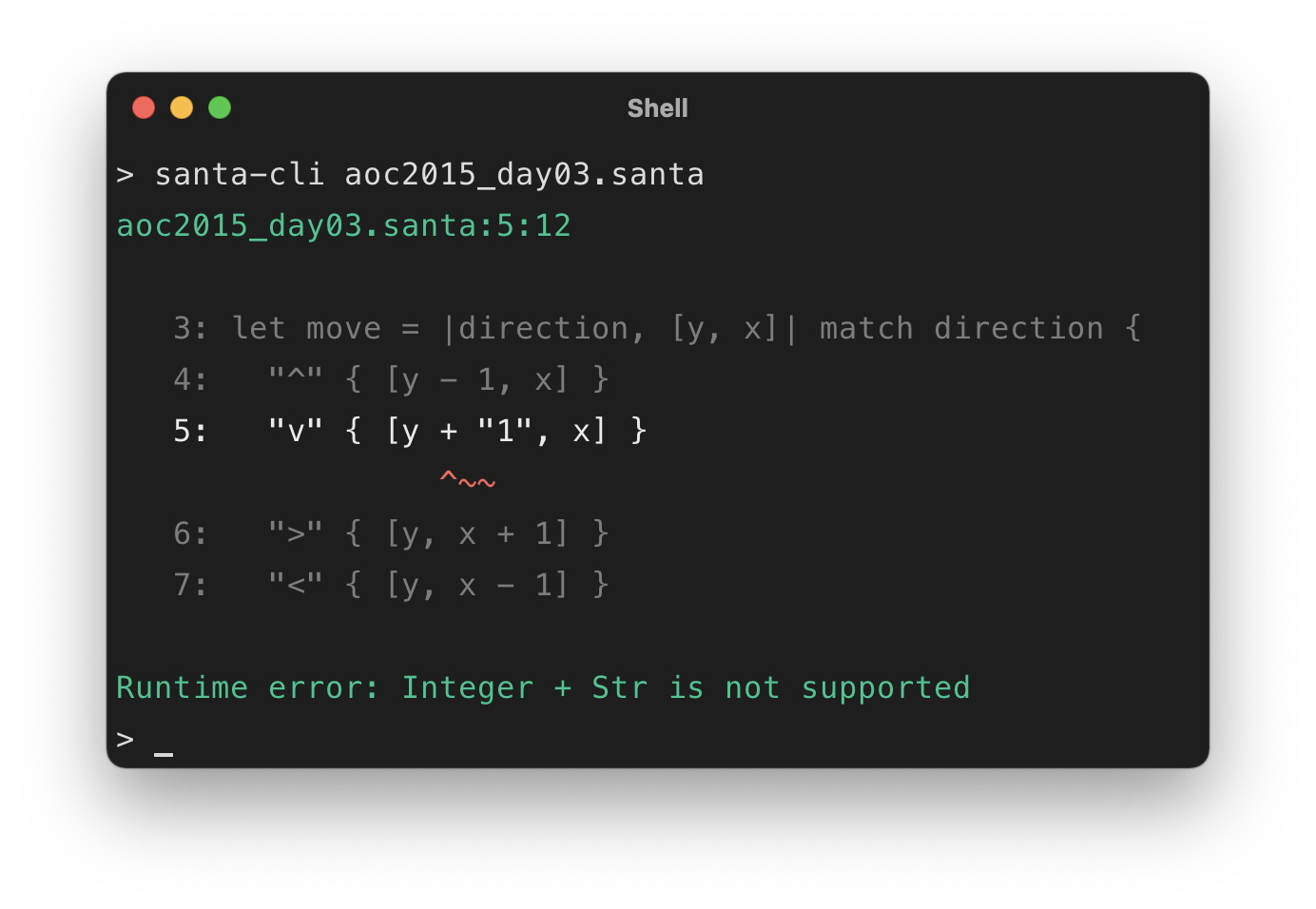 One of my design goals was to ensure that it was easy to locate and determine errors found at runtime. Aided by the error details the core language emits, I was able present errors and the source location in a concise manner.

With the Cli runtime built, I then moved on to developing the Web runtime equivalent. 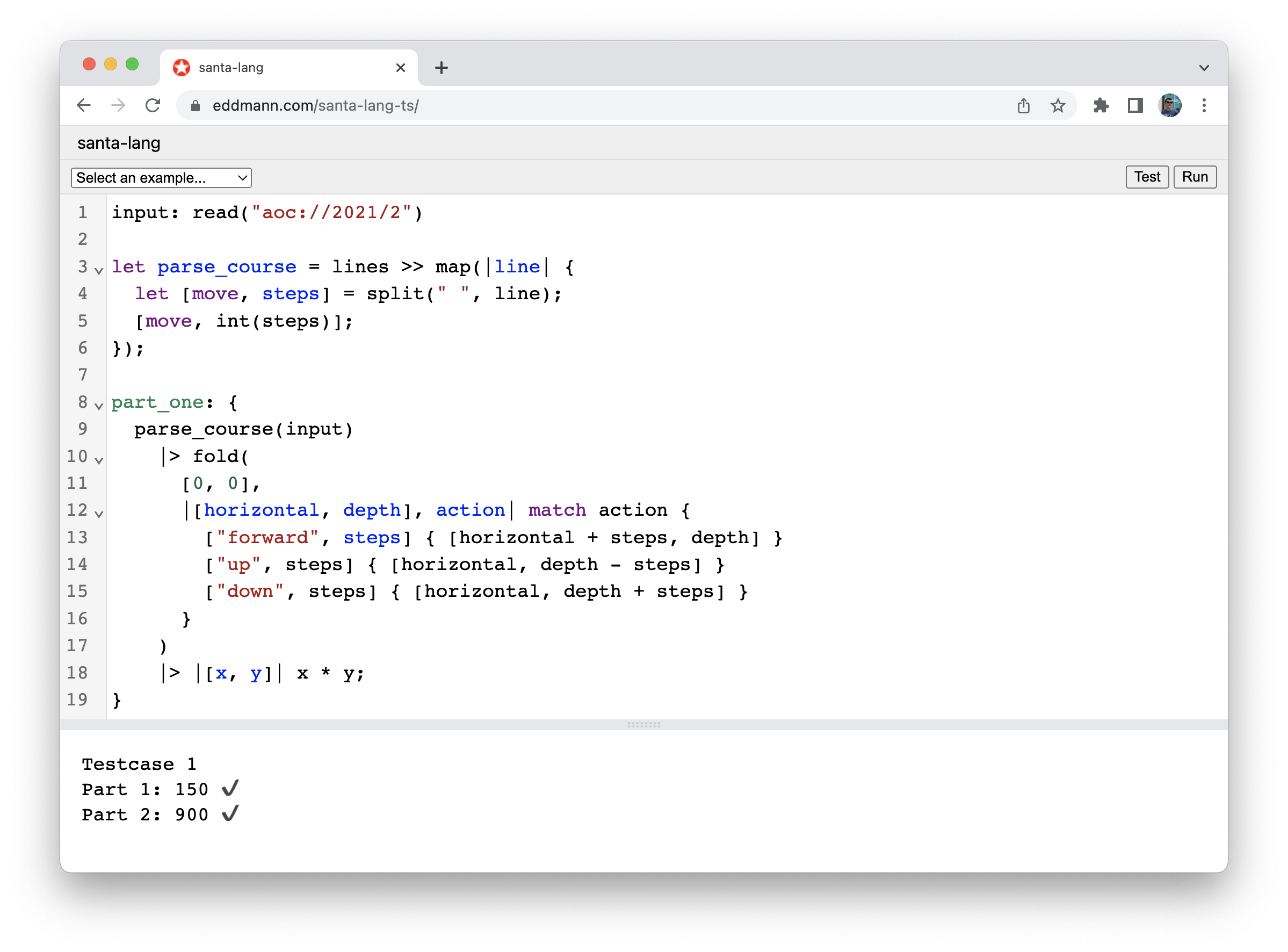 I opted to use Next.js (purely out of interest, CRA would have sufficed) and esbuild to compile and package the resulting artifact. Unlike the Cli, which only required source file location input, this version also needed a means for the user to enter a given solution. For this I employed CodeMirror, which has a great library with React bindings. Upon solution execution, to not block the user’s main browser thread, the language runtime is evaluated within a dedicated web worker.

After developing the language and initial Cli and Web runtimes, I took a little time off to focus on my annual allocating Secret Santa’s challenge. This year I decided to combine every supported Lambda runtime into a Step Function workflow (because… why not?!). One such runtime was provided.al2, which provides a means of executing your own custom runtime. With this project in my mind, I thought wouldn’t it be cool to be able to run santa-lang within Lambda! As such, I went about building a Lambda runtime which used a defined section to handle the given request. 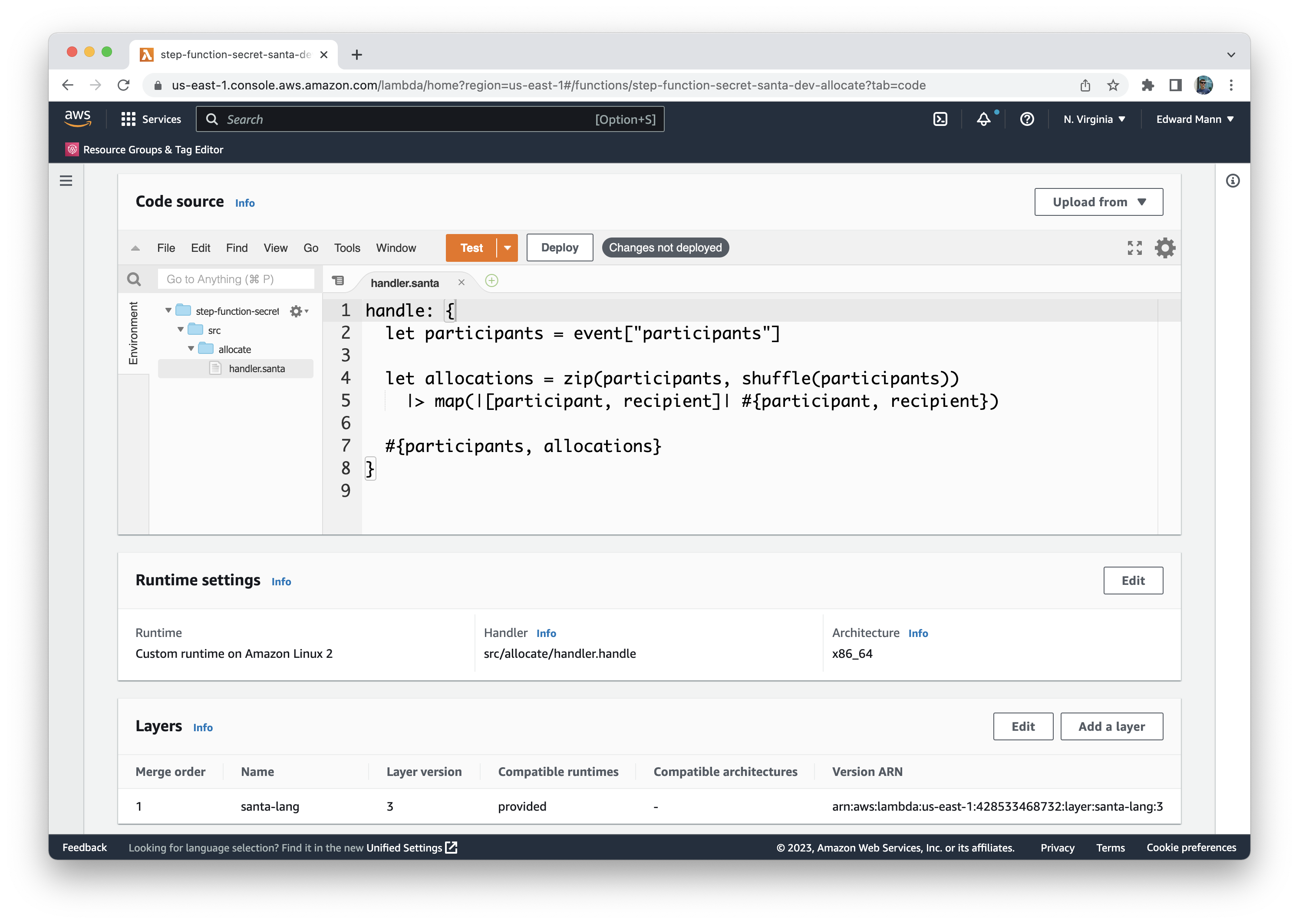 The runtime itself was packaged in a similar means to the Cli binary distribution (using pkg), except it honoured the Custom Runtime API contract laid out for AWS Lambda. This highlighted the languages versatility for not only solving Advent of Code puzzles (by way of the runner), but also being used as a general-purpose language.

Upon reflection, I am very happy with how this project has begun! I feel the choice to build the initial implementation in TypeScript was invaluable, as throughout the development and endless refinement stages (which still are ongoing) it has been frictionless experience. With the inclusion of libraries such as Immutable.js, I have been able to delegate a lot of the ancillary heavy lifting, and focus on the core problem at hand. The one caveat to this decision however, is due to choosing such a high-level host language, comes at the cost of performance. But as performance was not a key design goal of this project (favouring readability and correctness) I feel this will suffice.

Another take away from this experience, is how the building blocks that compose the end language and runtime can all be built and tested at each isolated level. For example, the lexer, parser, evaluator and subsequent AoC runner are all separate concerns, built on top of base in which previous responsibility has formed. I found that the book, laid this concept out very well, and I borrowed a lot of inspiration from it.

On top of this, I have been able to define the specification and intended language behaviour all through the included tests. This provides me not only with confidence in my current implementation, but also a blueprint to implement the language again (i.e. in another host language 😉).

December is fast approaching, and that can only mean one thing… another Advent of Code calendar is about to commence! This year, I wish to use santa-lang as my primary language in solving as many of the calendars puzzles as possible. In the new year I hope to reflect on this experience with a future article, detailing how this experience went.